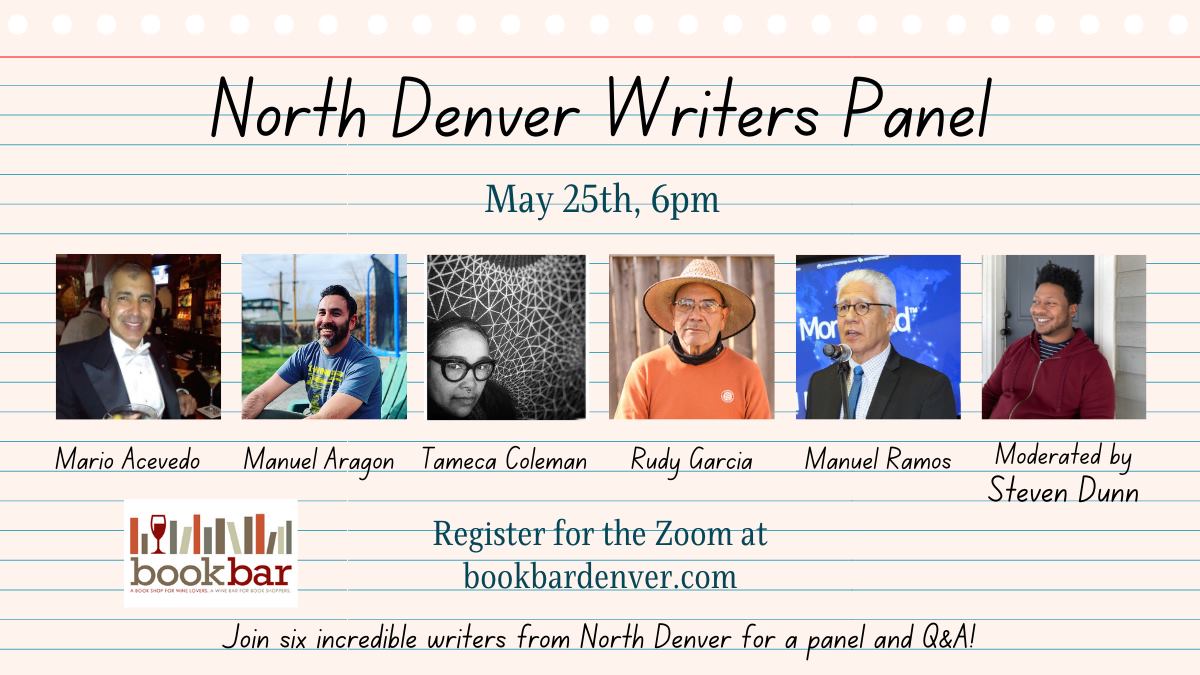 We are very excited to collaborate with Mario Acevedo, Manuel Aragon, Tameca Coleman, Steven Dunn, Rudy Garcia, and Manuel Ramos for a North Denver Writers Panel on May 25th!

About the Panelists:
Mario Acevedo is the author of the national bestselling Felix Gomez detective-vampire series, most recently Steampunk Banditos: Sex Slaves of Shark Island, and the YA humor thriller, University of Doom. His debut novel, The Nymphos of Rocky Flats, was chosen by Barnes & Noble as one of the best Paranormal Fantasy Novels of the Decade. His speculative fiction has appeared in numerous anthologies to include: Psi-Wars: Classified Cases of Psychic Phenomena, It Came From The Multiplex: 80s Midnight Chillers, A Fistful of Dinosaurs, Straight Outta Deadwood, Blood Business, Nightmares Unhinged, CyberWorld, and You Don’t Have a Clue. For 2021, he has a forthcoming Western novel, Luther, Wyoming. His work has won an International Latino Book Award and a Colorado Book Award. Prior to becoming a professional writer, Mario was an airborne Ranger, an infantry and aviation officer, an attack helicopter pilot, and a soldier-artist in Operation Desert Storm. In civilian life, he has worked as an engineer and taught art in prison. He also served as the president for Rocky Mountain Fiction Writers and the Rocky Mountain Chapter of the Mystery Writers of America. Currently, he serves on the faculty of the Regis University Mile-High MFA program and Lighthouse Writers Workshops. Mario lives and writes in Denver, Colorado.
Manuel Aragon is a Latinx writer, director, and filmmaker from Denver, CO. He is a graduate of NYU’s Maurice Kanbar Institute of Film and Television. His film work–writing and directing–has been featured on MTV, Pitchfork, and Stereogum. He most recently won the CineLatino Pitch Latino Award for Emerging Filmmakers with the web series Welcome to the Northside a comedic take on gentrification and Latino displacement in North Denver. He is currently working on a short story collection, Norteñas. Norteñas is a collection of speculative fiction short stories centered in the Northside, a Mexican and Mexican-American centered part of Denver, and the people, ghosts, and demons that live there.

Tameca L Coleman is a singer, multi-genre writer, itinerant nerd, and point and shoot art dabbler in Denver, Colorado. Their work explores heartbreak and healing, finding the words for our experiences, familial estrangement, being ‘in-between’ things, finding beauty, even during times of strife, and movement towards reconciliation. Their writings have been published in pulpmouth, Rigorous Magazine, Inverted Syntax, Full Stop Reviews, Heavy Feather Review, Lambda Literary, and more. Their photography has been featured in literary magazines and at Denver Westword. Their debut book an identity polyptych will be available September 2021 from The Elephants on the Salish Sea. For more information about Tameca’s work, follow them on social media at @sireneatspoetry.

R. Ch. Garcia had a dozen adult short stories and one alternate-world novel published under another name. But that’s unimportant because anymore he only writes stories for young adults and children. His first was a children’s fable, in Spanish, published by Cricket in Revista Iguana. Writing in Northside Denver, he gardens, landscapes, woodworks, and cares for cactus and wild birds that visit his and wife Carmen’s gardens, like his two Nietos. Plus he has a bright, friendly dog Menqui and a sorta good cat, Great Huntress. He’s lucky and privileged to live well, so his writing focuses on young people for the day everyone can be as lucky.

Manuel Ramos is the author of eleven novels and a short story collection. He has received the Colorado Book Award (twice), the Chicano/Latino Literary Award, the Top Hand Award from the Colorado Authors League, and Honorable Mentions from the Latino International Book Awards. His first novel, The Ballad of Rocky Ruiz, was a finalist for the Edgar® award. My Bad: A Mile High Noir was a Shamus finalist. He is a co-founder of and regular contributor to the award-winning Internet magazine La Bloga (www.labloga.blogspot.com), which deals with Latino literature, culture, news and opinion. His latest novel is Angels in the Wind, published by Arte Público Press in 2021.
About the Moderator:

Steven Dunn aka Pothole (cuz he’s deep in these streets) is the author of the novels Potted Meat (Tarpaulin Sky 2016) and water & power (Tarpaulin Sky 2018). He was born and raised in West Virginia, and after ten years in the Navy, he earned a BA in Creative Writing from the University of Denver and an MFA from Stetson University. He teaches Creative Writing in the MFA Programs at Regis University and Cornell College. Some of his work can be found in Columbia Journal, Granta Magazine, and Best Small Fictions 2018. 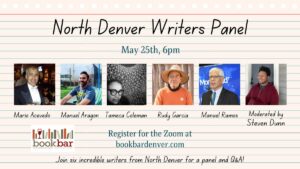